Any article on the Internet right now stating GTA V will be awful, is complete bologna. I don’t understand where they’re getting the sense that it’s going to suck by these screenshot’s and surfacing details of the game’s details. Frankly, this game does look and sound really good, but is it being overhyped? 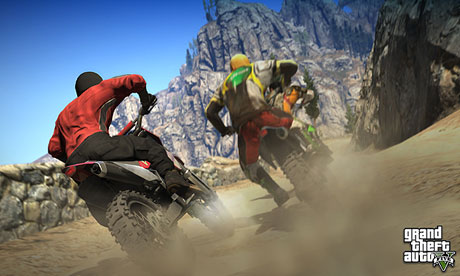 While visiting IGN today, I noticed that the front page was all about Grand Theft Auto: V. On the day possibly the biggest game in history is launching (Call of Duty: Black Ops II) is launching, IGN had their top news story as “Grand Theft Auto V Day 2″” where they’re talking with executives and people involved with the game over at Rockstar North. Right now the top news story is the Black Ops II review because so many people have clicked it, but is an interview with an executive over a game we hardly know anything about topping a big game review going overboard?

I know this game is going to be great, Grand Theft Auto’s always are, but how much more can Rockstar add to their series on the current generation of consoles?

Rockstar is going to please a lot of people with it, but I think most people are expecting another masterpiece after Grand Theft Auto IV. What made GTA: IV so amazing was that it was the leap from the PS2/Xbox era to the PS3/360 era, and the graphical, performance, and gameplay difference was phenomenal. How is Rockstar going to pull off another amazing, defining game while they’re on the same generation of consoles.

I’m not saying here that Grand Theft Auto: V will be bad, I’m almost 100% positive it will be great and a ton of fun to play, but I think people are expecting a lot here, and I highly doubt Rockstar is going to be showing us another huge leap. Compare this situation to that of Uncharted’s. Uncharted 1 to 2, amazing, blew all of our minds. Grand Theft Auto Vice City/III/San Andreas to IV, amazing, blew everyone’s mind sky high. Uncharted 2 to 3, Still awesome, people were hoping for more. Grand Theft Auto IV to V, will it blow our minds even more?

Only time will tell, but until then, keep it locked to TheGamesCabin for more up to date news!